The Makarrata was the vision of the late Dr Joseph Gumbula. Dr Gumbula has spent the last two decades working with the custodians of collections of art, photographs, craft and human samples collected from Milingimbi over the last century identifying traditional ownership. A significant amount of this material comes from collections of those who worked with the Methodist Overseas Mission. 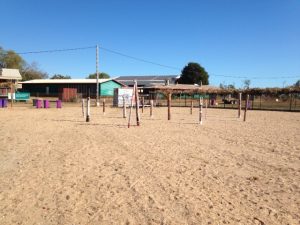 Rulku Wanga Ceremony Ground at Milingimbi prepared for Makarrata.
Burial poles from the different clan nations were placed in the centre
with Stage area and bow shelters in the background.

The Makarrata is a traditional ceremony whereby justice was done when there had been a crime by one clan member or group against another. This Makarrata was enacted to address the injustice of the removal of significant and some sacred materials from the Milingimbi community without proper permission. In acknowledging the past wrongs, it sought to open a productive dialogue between holders of these materials and the rightful owners. The subtheme of the Makarrata was “Bringing the past into the future”. This expressed the hope that the recovery of significant products of the past would assist future generations in knowing and continuing their heritage.

After the death of Dr Gumbula, his vision was brought to reality by Keith Lapulung Dhamarrandji, Community Liaison Officer for the Milingimbi community with East Arnhem Regional Council working with Stuart Porteous (a former teacher and Landscape Architect at Milingimbi), Louise Hamby from ANU in Canberra and Lindy Allen from Museum Victoria in Melbourne.

Built in the 1950’s with locally made mud bricks and a stained glass window created from original paintings from Milingimbi Artists, the church had fallen into disrepair in recent years. The stained glass window was smashed in January 2014. Carolyn McLennan, a Conservator based in Darwin, is working on a restoration project. Discussion at the Makarrata revealed that the original paintings Edgar Wells used to develop the design of the window may be held in the South Australian Museum collection. This is under investigation.

Work has begun on the restoration of the whole building with a new roof being installed in 2015. In 2016, rewiring of the whole building has been completed. Bukmak, a construction and maintenance company with ALPA Corporation, has been working with the church to replace windows and doors with assistance from a NT Government Grant and the Community Development Program of the Commonwealth Government. The metal frames have been replaced with wooden frames by the carpentry workshop at Milingimbi.

The future of the space that contained the stained glass window is being discussed. The aim is have the building is good condition for the centenary in 2023.

NRCC, from its own resources, has been funding the restoration of the church with considerable help this year from Governments through a grant and the CDP program managed by Bukmak. 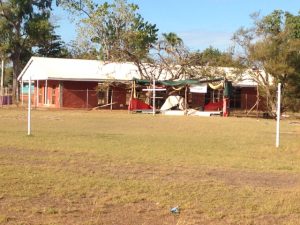 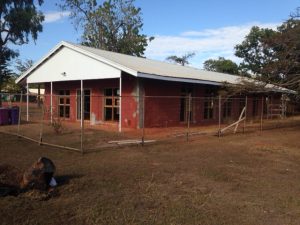 The restoration of the window in the church or its replacement is a major issue looking towards the centenary in 2023.

Recording the history for the centenary is another major focus.

Bronwyn Shepherd, for her PhD through Deakin University, is working on a history to 1944. It is suggested that a number of people could contribute to a published history in 2023. Lindy Allen and Louise Hamby have indicated that they would be willing to work with Bronwyn and others on this.

ARDS (Aboriginal Resource and Development Services Aboriginal Corporation) is seeking funding for a project to place an audio-visual record online. It is called “Bringing stories Together”. The project involves collecting visual and audio records but also interviewing members of the community to collect their stories and put on the internet.