The Moderator, Stuart McMillan, launching Adapting to Difference by Margaret S Bain OBE, told those gathered in the Todd Mall Alice Springs on Saturday 14 April 2012, that the Northern Territory Invervention, the South Australia unofficial counterpart (which effects the Pitjantjatjara people) and the Strong Futures legislation, were all developed by a flawed consultative process.

Mr McMillan, quoting Fred Chaney AO from the forward of the book: ‘The book is a vivid reminder of how easy it is to go through an appearenace of consultation and/or engagement which in reality is a sham’. Mr McMillan went on to say: ‘Successive policy failure of many decades can be said to have been generated by lack of true engagement with Indigenous people as equals and partners in the process.  These policy failures have led to increasing levels of dependency, anger and dysfunction for the Indigenous peoples of Australia’.

Ms Bain’s book points to a communication methodology between dominant Australia and Indigenous people which is about real mutuality, respect and productive partnerships. 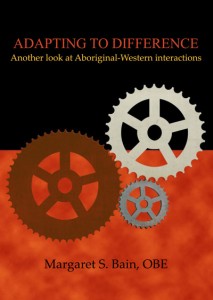 Copies of Adapting to Difference are available from the Synod Office for $19.00 each or through Bookpal at www.bookpal.com.au