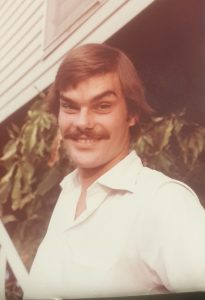 The year was 1982.  The Darwin Young Adults group was doing a Theatre Restaurant as a fund-raiser.  We had practised for weeks.  On the night, we transformed the Nungalinya College dining hall into a Restaurant with a stage and appropriate lighting and sound.  The room was chock-a-block full, with 80 to 100 paying guests enjoying their meal as they watched the show we were putting on for them. There were several songs and skits and even a melodrama of ‘Hannah, from Spanner Manor’.  The evening came together in a final comedy based on a Parish Council meeting.  It wasn’t difficult at all to make that a comedy, considering the wonderful people, personalities and relationships of the Northern Synod.

The Young Adults were dressed up as members of the Parish Council and that included three of us dressed as the three Darwin Uniting Church Ministers.  Ken Aitken, from Melbourne, was dressed as Nevin Vawser the then Minister at Darwin Memorial Uniting Church.  Nevin loved taking photos and so Ken had a camera hanging around his neck.  I was dressed as Bill Clarke, the enthusiastic Irishman who was the Minister for Casuarina Uniting Church. In those days, Casuarina Uniting still met in Anula Primary School on Sunday mornings.  Bill was renown for wearing safari suits, so I found a light green safari suit in an Op Shop, stuck mutton chop side-burns to the side of my face and practised my best Irish accent.  The other Uniting Church Minister in town at that time was Ron Brandt, at Nightcliff Uniting Church. His son, Steve, dressed up as him.  Steve pulled an orange skull-cap tightly over his head and placed a pillow across his chest inside a tee-shirt to look like his big, strong father.  It was hilarious.  He also borrowed a pair of Ron’s shorts and his boots.

At one point in the play, Steve was meant to stand up and say a few words.  When he pushed his seat back to jump up, unfortunately he went backwards off the make-shift stage and as he was falling, somehow Ken (as Nevin Vawser) and I (as Bill Clarke) caught him with an arm each and managed to fling him forward back onto the stage.  Flying through the air and landing on the stage, Steve with his orange skull-cap, spontaneously called out, “Well shave my head and call me Kojak, I’m in charge now.”  I think that was the point where Ron leapt up from his seat and called out, “There they are.  I’ve been looking for my boots.  So that’s what happened to them.”  There was never a dull moment with those Brandt men around.

My mate Keith Fagg, from Geelong, Victoria wrote a funny and clever script of the Parish Council meeting. He was working in the Church Office back then. It was an evening of great fun and a sense of togetherness.  There are people in Darwin today who still remember that night.  In fact several of us were in the Young Adults group.  It was a wonderful time in our lives and we did lots of fun things together.

At one point Ken, Steve and I did a soft-shoe shuffle as the three Ministers, with straw boater hats and sang “You and me can we be partners. . . . Together we belong.”  The evening ended with all of us young adults on stage, arm in arm, singing about the joys of belonging and being a part of the church.

That night is burnt into my memory as a mountain-top experience of friendship and happiness.

A few months later my good friend Steve Brandt died in a motor-bike crash on Bagot Road.  One moment he was here.  The next he was gone.  There are still days when I feel the grief of his loss wash over me.  I miss him.  Steve was a good bloke with a great sense of humour.  He had a strong sense of justice and a commitment to people who were struggling with life.  I think that must be a family trait.

A few years later I was visiting Ron, up on Lee Point Road and we were reflecting on that happy night at Nungalinya.  Ron had a photo of Steve in his office and he gave it to me.  I also took a photograph that day of Ron with my son Matthew.  If you visit me in my office you will see that photo of Steve on a shelf next to where I sit.  You will also see the photo of Ron and my son Matthew there as well.  I carry Steve in my heart every day.  Sometimes I go down to his grave at McMillans Road and sit there and talk with him like we used to so many years ago when we were young men.  I talk to Ron too.  And I thank God that he brought those men into my life.

It’s good to hold onto the happy memories.  It’s good to thank God for the people in our lives.

It’s good to enjoy time with our friends and family. It’s good to remember the stories from the past.

Thanks be to God.