Reverend Thresi Mauboy  was installed as the Moderator for the Northern Synod on 20 June 2015. Thresi is an Indonesian woman who grew up In Soe West Timor. Her father pushed her to study medicine but her calling was never in that direction. After a year of study and much prayer her lecturer noticed her sadness and encouraged her father to allow her to study towards ministry in the GMIT Synod of West Timor. She received her theological training in Kupang at Artha Wacana Christian University, graduating in 1991 with a Bachelor of Theology and a Certificate of Social Analysis. Because Ministers in Indonesian are recognised as significant community leaders and are often consulted for advice beyond their role as minister, her certificate covered subjects as wide ranging as law, agriculture, sociology, management and medicine.

Soon after her graduation she became engaged to Ben Mauboy who had been adopted by Thresi’s Uncle. Ben’s father had immigrated to Darwin before Cyclone Tracey in 1976 and in 1979 Ben, his Mother and Sister arrived. In 1988 10 years later, on a family holiday in Kupang, he met Thresi again. After much persistence and prayer Thresi finally agreed to marry after a lengthy long distance engagement. Thresi worked for 8 months in Flores as an intern minister where she and two other ministers worked with 5 congregations that held about 500 families, they had 3 worship services every Sunday and Thresi loved her work in Flores.

On December 6th 1992 she was ordained as a Minister of the Word in the GMIT church and she was then placed by the GMIT Synod back in her home of Soe (Oefau). Here Thresi married Ben and they lived apart for 2 years, only seeing each other every 6 months when Ben travelled to West Timor. The Uniting Church in Australia has had a lengthy and very strong relationship with GMIT so even as a child Thresi was aware of the UCA. She was drawn to the UCA logo and had dreamt of one day belonging in the UCA.

Thresi finally joined her husband in Darwin in May 1995 and within a year their much loved son Liusem was born. Their first home was on the site of what is now the Darwin CBD plaza next to Darwin Memorial. Thresi did not speak English and she initially taught herself by watching television shows like Sesame Street and the Wiggles with her young son and then attended classes provided by the immigration department. Thresi remembers seeing Stuart McMillan on a motor bike and thinking ‘one day I will meet him’ little did she know she would follow him as Moderator of the Northern Synod!

Initially she belonged to the GMI congregation at Nightcliff which ended up splitting, with half the congregation becoming the Philadelphia UCA congregation which was the first Indonesian congregation in UCA. Thresi remained with the GMI congregation; they were sent an intern minister from West Java, who asked Thresi to assist her with the Sacraments. When this intern minister finished her placement the Church Council asked Thresi to become their minister. Thresi agreed on the condition that they become a UCA congregation and so the Indonesian Missionary Congregation of UCA was formed. For a number of years they searched for a permanent home moving from the Lutheran church, to 3C, to a house church and then finally in 2000 back to their current home in Nightcliff. May 12th 2005 a service of recognition was held to recognise Thresi as an ordained Minister of the Uniting Church in Australia.

Thresi is presently the Minister for the Indonesian Missionary UCA which worships at Nightcliff UCA. She is also the chairperson for the Indonesian National Conference of UCA (the first woman in this position) and in that role her guiding principles have been ‘One body, many members’ and from Philippians 3:13b ‘But one thing I do: Forgetting what is behind and straining toward what is ahead’. She is working with Uniting World as a consultant advisor for the Asian Manager for Uniting World. Thresi has been a member of the National Reference Committee for Multicultural and Cross Cultural congregations for 6 years and is involved in their working group. Thresi is a member of the Pastoral Relations and Pastoral Committee of the Northern Synod. She has strong relationships with both the NRCC and Pilgrim presbyteries of the Northern Synod. People are still telling stories of the group of AuSIL and NRCC translators that she led to West Timor in 2013.

Thresi recognises that her call to leadership is a call from God and in the light of the words of Jesus: ‘The greatest among you will be your servant. For whoever exalts himself will be humbled, and whoever humbles himself will be exalted’, she came to accept this call, believing that God can do all things and that his plan will not fail. She remembers from an earlier call in her life – Jesus’ words of mission: ‘You did not choose me, but I chose you and appointed you to go and bear fruit, fruit that will last, then the Father will give you whatever you ask in my name’. So with humble confidence Thresi has said: “Even though what lies ahead may still be hidden, with God’s guiding hand full of confidence, I accept the call and I am ready to work with the Northern Synod as a TEAM. I ask that you will help me through prayers, support, assistance and mentoring, when I need it. Remind me if I take a wrong step, lead me if I need it and accept all the flaws and weaknesses for the sake of this noble work. For from Him and to Him are all things, to Him be the glory forever. Amen’

Thresi’s experience at an international and national level and her cross cultural skills will hold her in good stead. Thresi comes to the role of Moderator as a strong woman of prayer, faith and compassion. When asked to consider becoming the Moderator Thresi said “I don’t pray for an opportunity but pray that I will be ready when the opportunity comes”. She acknowledges the movement of the Holy Spirit in every part of her life and we will be blessed and privileged to have her as our Moderator. 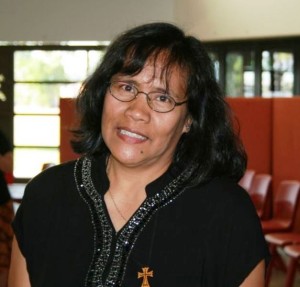