For sometime now the Northern Synod has strongly supported the delivery of dialysis services in remote communities. At the recent Annual Synod meeting, members endorsed the proposal that dialysis on country be an issue of concern for the Synod. So it was with great pleasure that we received the announcement by the Federal Assistant Health Minister, Fiona Nash that $15.3 million will be granted to Purple House, an Alice Springs-based dialysis treatment centre. This funding includes $9 million over three years to keep the centre operational, with $6.3 million for more renal infrastructure in remote communities. There will also be new patient accommodation in Alice Springs and Tennant Creek.

Sarah Brown, from Purple House, said the funds would mean more dialysis beds and 16 more dialysis machines in communities in central and South Australia. ‘It’s not only about having people home all the time, having a life and on dialysis, but contributing to the community, working in the community, looking after grandkids and being looked after by their families,’ Ms Brown said.

Ms Brown said having dialysis in communities could also help educate people about renal disease and the lifestyle decisions people could make to ensure they reduce their risk of kidney disease. People in remote Central Australia are 18 to 20 times more likely to suffer from renal disease than the rest of the population and are 20 years younger when they contract it.

Ms Nash also announced that $10 million that had been promised in 2011 would finally be delivered to develop accommodation in Tennant Creek and Alice Springs for end-stage renal patients from Papunya, Mt Liebig and Docker River who needed to move to town for treatment.

UCA President, Stuart McMillan said he was delighted to see the bipartisan support for dialysis on country from the Federal Liberal, Labour and Greens parties. 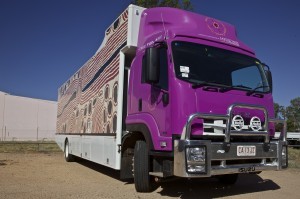