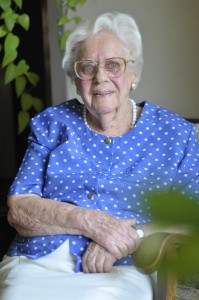 Miss Margaret Somerville, a member of Rockdale Uniting Church, passed away last week, just two months short of her 102 birthday. Margaret’s story is one of great courage and human endurance, as described in Margaret’s book They Crossed a Continent. A film “Croker Island Exodus” was dedicated to her life and screened as a finalist at the 2012 Sydney Film Festival and also on the ABC.

Despite her fame, Margaret was dismissive of any notion that she was deserving of celebrity. Though she shied from personal credit, Margaret’s experiences were the result of a strong calling.

In her interview with the NSW/ACT magazine Insights in 2012, Margaret saw her life divided into three acts: Life pre-Croker, Croker and post-Croker.

After her parents passed away, Margaret dedicated the time she’d once put into caring for people, into making hand crafts sold in fundraising. With others she began making cross-stitch aprons to raise money for the Bible Society.

A colourful collection of wool sat beside her constantly as she knitted finger puppets for Sunday Schools and other fundraising events. Margaret did not marry or have children, but her family is larger than most. She is thought to have fostered between 20 and 30 children in her lifetime.

Somerville Community Services a UnitingCare agency of our Synod is named after Margaret in honour of her life and work at Croker Island. Margaret maintain an active interest in the mission of Somerville. Margaret regularly  wrote, yes wrote letters to Vicki O’Halloran and the Board of Somerville. Her life has been an inspiration to many.