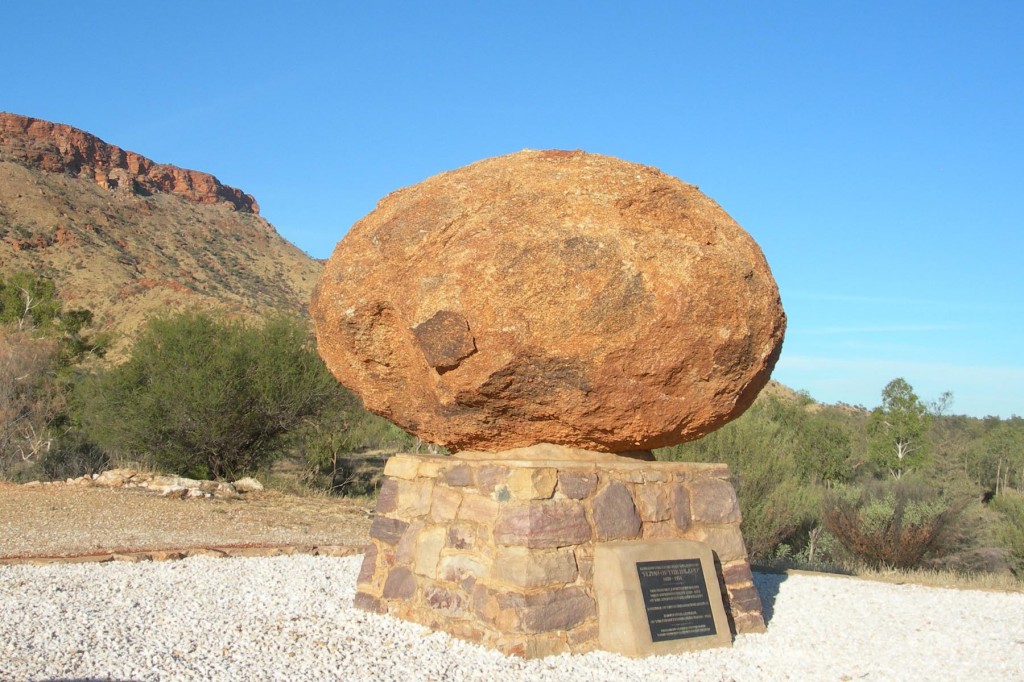 In June 2011 The McDouall Stuart Branch of the National Trust discussed a theme for the 2012 Heritage Week in Alice Springs.  100 years ago this year Rev. John Flynn presented a proposal to the Presbyterian Church for the establishment of the Australian Inland Mission.  Flynn’s vision of remote nursing homes, the flying doctor service and the pedal radio followed.  It was particularly appropriate that 100 years later, the 2012 Heritage Festival should recognize the Australian Inland Mission and John Flynn.

As part of the celebrations, the Centenary Committee was set up with members from the National Trust, Adelaide House, Frontier Services, St Philips College, the Uniting Church and from another of Flynn’s visions, the Old Timers Homes.  Heritage Week commenced on 14 April with a re-enactment of the arrival by camel of the first patrol padre in Alice Springs followed by an open day at Adelaide House.  The Doreen Braitling Memorial lecture focusing on John Flynn was presented the next day by Max Griffiths.  Founders Day Assembly and the opening of the John Flynn Garden at St Philips, and an AIM Centenary dinner at the Old Timers Village also became part of the program.

The committee felt that improvements at John Flynn’s grave on Larapinta Drive should be considered to further acknowledge this remarkable Australian.  In 1950, a year before he passed away Flynn stood on Mt Gillen, looking down on Chinaman’s Creek and the road that he and Alfred Traeger took when travelling to Hermannsburg for early pedal radio experiments.  He said, “This is where I would like to be buried”.  And so, following Flynn’s funeral service in Sydney, a simple service was held on 23 May 1951 beside Chinaman’s Creek.  Finally, on 12 August 1953 on a small rise 400 metres west of where the 1951 ceremony took place, his ashes were placed under a rock at a site that has become known as ‘Flynn’s Grave’.  An area of 0.34 hectares surrounding the grave was declared a National Reserve in 1957 and is managed by NT Parks and Wildlife.

Over the years erosion has occurred on the walking track up to the monument and the original white crushed rock on the plinth had been replaced with rough concrete. To progress plans for the repair work a meeting was held at the site in November 2011.  Attending were representatives from Parks and Wildlife, St Philips College, the John Flynn Commemoration committee and an Alice Springs heritage architect, Domenic Pecorari.  It was decided that laterite roadbase material should be placed over eroded areas on the access track and around the plinth, and the concrete should be removed and white aggregate reinstated.  Domenic suggested that two old style wrought iron seats should be placed under a small ghost gum just north of the grave. 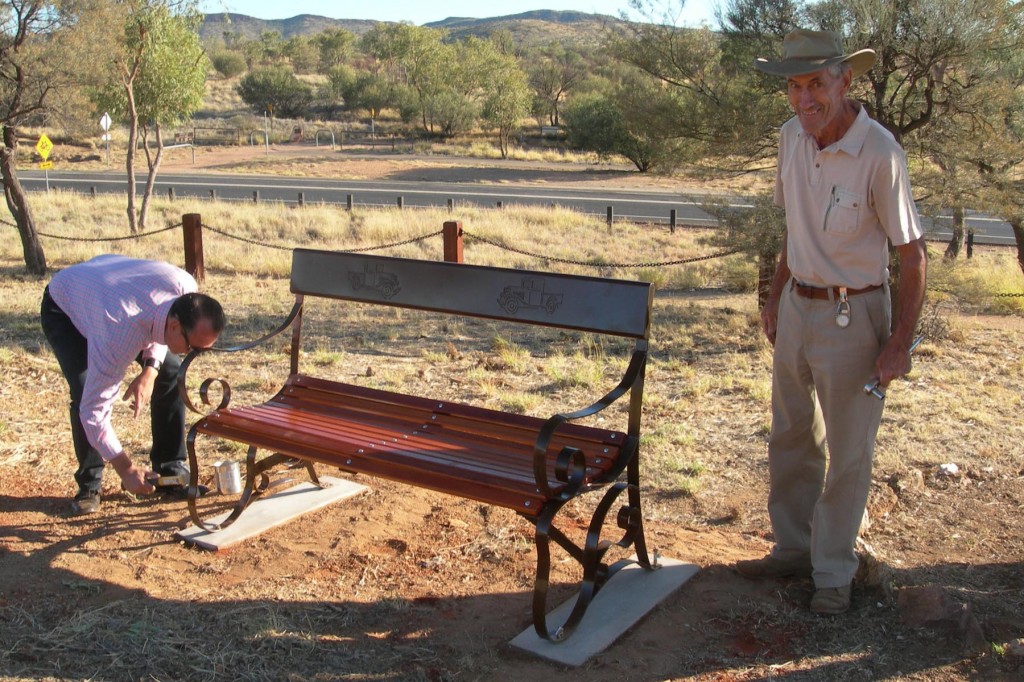 On Wednesday 21 March 2012 a team comprising Parks and Wildlife rangers, three Ingkerreke workforce staff, volunteers from the Uniting Church and Frontier Services and two gap year young men from St Philips College started work at the site.  Over two days the concrete plinth was broken up and removed, laterite was brought up in wheelbarrows, spread along the walking track and around the grave site then watered and compacted, and two truckloads of quartzite aggregate was placed on the plinth.  Grass in the reserve was slashed and finally the plaques in memory of Rev John Flynn and his wife Jean were cleaned.

The steel frames for two seats were made by Ross Engineering (with a third seat that was later placed in the John Flynn garden at St Philips).  They incorporated the outline of a camel and a vintage truck produced with a plasma cutter on the backs of the seats.  A clear finish was applied to the steel and the overall work was of outstanding quality.  Volunteers fixed hardwood slats to the frames and they were later secured to concrete blocks poured on site.

On Friday 20 April twenty five people gathered at Flynn’s grave for an official unveiling of the seats and the improvement works.  In the ‘congregation’ were two former AIM nursing sisters, the widow of Alfred Traeger, inventor of the pedal radio, three daughters of Rev Fred McKay, successor to John Flynn as superintendent of the Australian Inland Mission,  Katherine Hastie represented NT Parks and Wildlife.  The seats were blessed by Colin Gordon, patrol padre with Frontier Services and following the ceremony everyone enjoyed an early morning tea and Anzac biscuits. 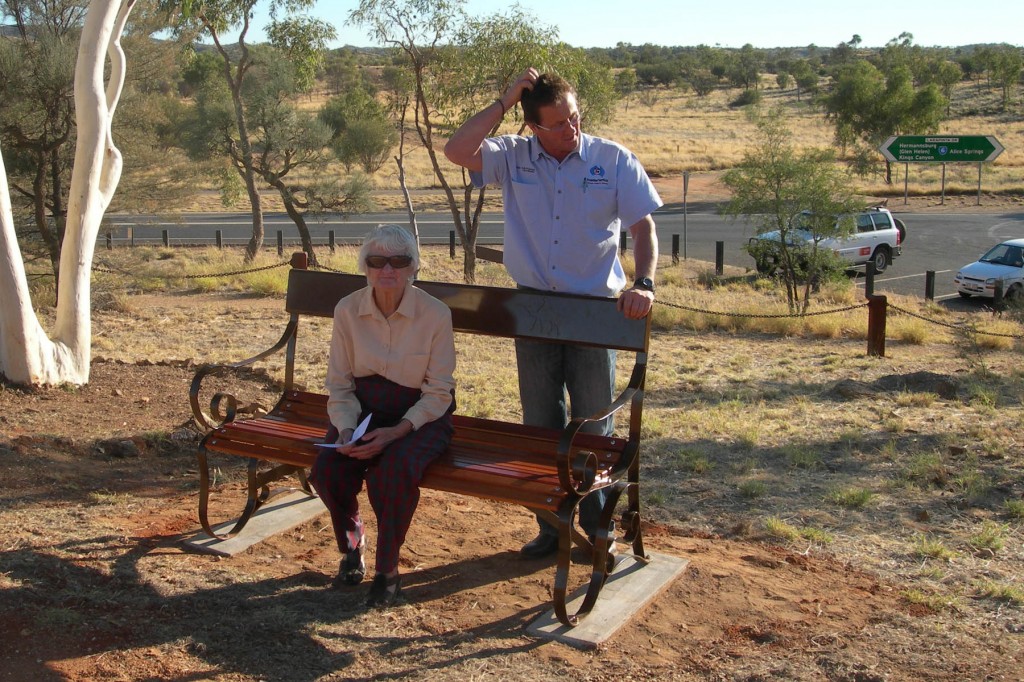 The project would not have been possible without the help of many people.  With special mention to Ross Engineering for some fine work on the seats, the John Flynn commemoration committee wishes to thank the following: