In April 2011 Stuart Traynor, chairman of the Alice Springs National Trust invited the Uniting Church in Alice Springs to celebrate the heritage of the AIM during Heritage Week in April 2012.

It was determined to hold an open day at Adelaide House, the AIM’s hospital in Central Australia beginning with a re-enactment of the 1915 Patrol by Padre Bruce Plowman with Aboriginal guide Dick Gillen. The relaunching of Margaret Bain’s book: Adapting to Difference: Another look at Aboriginal-Western interactions would follow. Adelaide House would then be opened as a living museum with nurses Small and Pope administering care. Short talks by those with an Adelaide House connection or AIM story would be invited to share their story. A birthday cake for those born in Adelaide House between 1926 – 1939 would be provided. 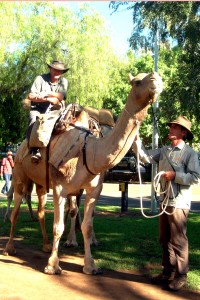 Moderator Rev. Stuart McMillan, assisted by Rev. Kate Fraser, launched Margaret Bain’s book and friend Jan Richardson expressed her gratitude to Margaret for the understanding it brought through simple explanations of differences in language. Red Kangaroo Books held a stall on Adelaide House verandah and all copies were sold. 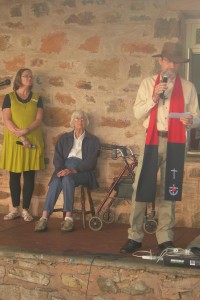 A young stockman with a dislocated shoulder was brought into Adelaide House and tended by sisters Small and Pope, the first two nurses to come with John Flynn in 1926. 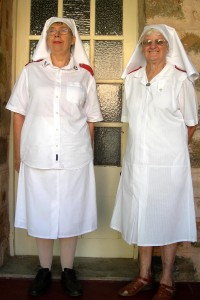 Laurel Butcher and Margaret Hewitt as Sisters Small and Pope 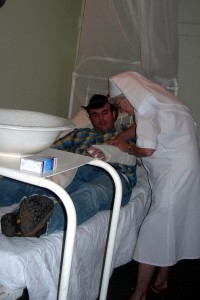 Various talks were given. Fred and Meg McKay’s daughters Margaret and Ruth who lived in Adelaide House when their mother volunteered here when it was a hostel for bush mothers and reminisced about watching the John Flynn Memorial Church being built and having the architect Arthur Philpot stay with them. He had them in stitches laughing and entertaining them with unique musical instruments. Anne Blakely who travelled from Esperance read from her mother’s diary. Her mother was sister Gwen McCubban who nursed in Adelaide House for two years then married the local mechanic.

About 8 of the babies born in Adelaide House between 1926-1939 were located and came to share in the cutting of a fruit cake which was then distributed amongst the many guests who had come to visit and share morning tea.

St Philip’s college had their Founders Day on Wednesday 18 April where Margaret Wheatley, Ruth Cook and Liz McKay, all daughters of Fred and Meg McKay addressed the assembly. The afternoon saw the opening of the Flynn Garden which is a beautiful, peaceful area to reflect and relax.

David Hewitt approached NT Parks and Wildlife to improve the surroundings of Flynn’s Grave. With their assistance and that of congregation members, Frontier Service’s Rev. Colin Gordon and students from St. Philip’s College, the cracked concrete was replaced with white aggregate and walking paths restored. David Hewitt had a vision of a couple of bench seats being installed to allow time and comfort for reflection at the grave site. Local business Ross Engineering manufactured the steel frames as a donation to the project. David, Danny Carl and students from St. Philip’s then screwed the stained wood onto the frames. The seats have a camel, the mode of transport initially used by Flynn coming to the inland and a dodge buckboard, Flynn’s vehicle later, etched into the seat backs. They are most impressive. These seats were installed and dedicated at an 8am ceremony on Fri. 20th April and conducted by Rev. Colin Gordon. Those who witnessed the ceremony were mainly visitors who came to Alice for the AIM celebrations. Tea, Coffee, ANZAC biscuits and jelly cakes were enjoyed picnic style after the ceremony. 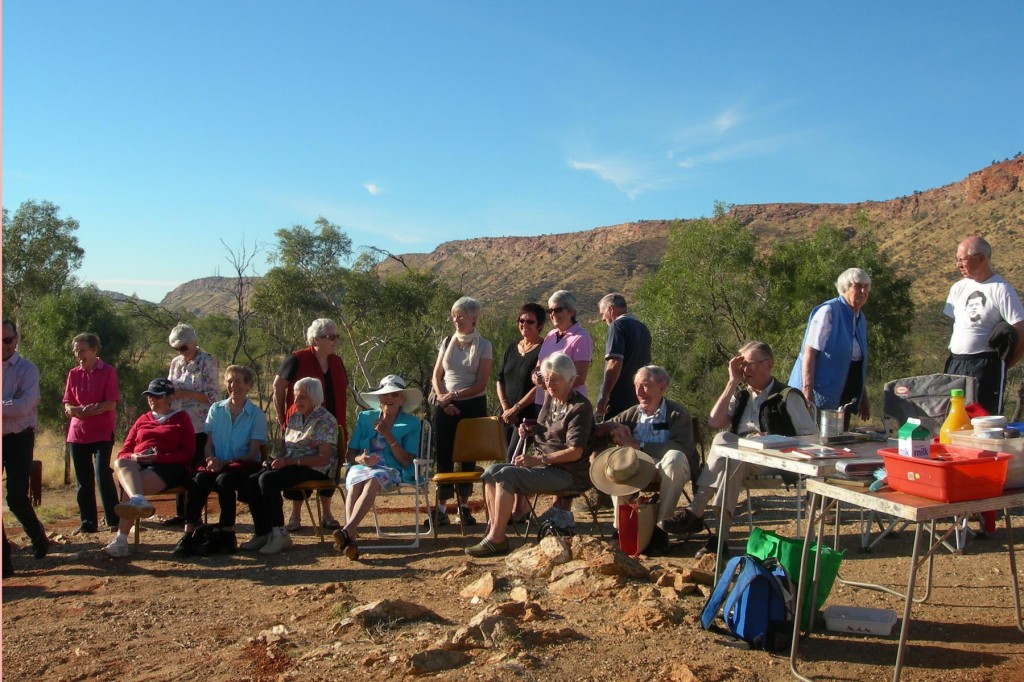 The Old Timers village was involved with the dinner held on their lawns on the night of Saturday 21 April. Singer songwriter Jeanette Wormald entertained 130 guests then author Margaret Ford spoke of her time on patrol with the AIM in Birdsville, Mount Isa, Cape York then Alice Springs in the 1950’s and 60’s. She wrote End of a Beginning and Beyond the Furthest Fences with the Chalmers family coming to the dinner to meet the lady who wrote about their ancestors. It was a great time of reunion with many of the guests having a tie in some way to the AIM.

The outdoor service planned for the lawns of the John Flynn Memorial Church was moved indoors due to the welcome rain. Kate Fraser led worship with the theme Looking Back and Looking Forward, celebrating the work of John Flynn and the AIM and reflecting on the work of serving the people of the inland over the next 100 years.

Some people lingered for a few more days and came into Adelaide House for a cuppa and chat adding to Flynn’s motto that Adelaide House is “a place for people”.